“Abe” Gets World Premiere in IL Town Where Lincoln Spoke

Eight days after the Feb. 12 bicentennial anniversary of the 1809 birth of Abraham Lincoln, a new musical, Abe, about the 16th U.S. President’s early life, gets its world premiere in Quincy, IL, Feb. 20. 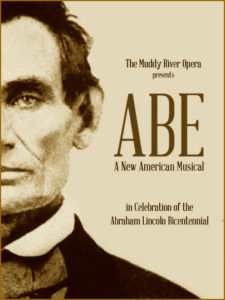 Abe the Musical — a traditional show rooted in the Rodgers and Hammerstein tradition — will have two performances Feb. 20 and Feb. 22 by the Muddy River Opera Company, the troupe that performs operas and musicals in history-rich Quincy, the site of one of the famous 1858 Lincoln-Douglas debates.

The show with music by Roger Anderson and book and lyrics by Lee Goldsmith has already been announced for a second, larger outdoor production in Lincoln country, in New Salem, IL, for summer 2009. It’s also being published and licensed by Samuel French.

Writers Anderson and Goldsmith, who are in Quincy for the weekend, wrote the scores to the musicals Shine (book by Richard Seff), Quality Street and Ladykiller (book by Chuck Blasius), and the Carbonell Award-winning Chaplin (book by Ernest Kinoy), which was recently seen in a U.K. workshop production.

According to Muddy River notes, Abe the Musical “tells of Lincoln’s life from his days in New Salem where he makes his first attempts at self-improvement, discovers law, falls in love with Ann Rutledge and first runs for public office. It continues through his years in Springfield, where he opened a law office, met and married Mary Todd, and was eventually elected to the presidency.”

The creative team includes director Mark Meier (a Chicago director who is also the composer who penned the musical, The Ceiling, about the struggles of Michelangelo in completing the painting of the Sistine Chapel); orchestrator Greg Anthony (Signature Theatre’s Ace); choreographer Drew Quintero; and musical director Scott Schoonover (director of Union Avenue Opera in St. Louis), who conducts the 20-piece orchestra.

Although the book and lyrics for Abe were originally written by Goldsmith in the 1970s, the project lay dormant until Muddy River Opera Company’s artistic director, Avril-Marie Bernzen, requested its completion for the 2009 season.

As previously reported, Abe has been picked up for a second 2009 production — at the Illinois historic site where much of the show is set. Kari Catton, executive director of Theatre in the Park, the resident non-Equity company at Lincoln’s New Salem State Historic Site near Petersburg, IL, previously told Playbill.com that the musical will be one of a handful of summer 2009 shows at the 535-seat outdoor amphitheatre there.

New Salem State Historic Site, a reconstruction of the village where Abraham Lincoln spent his early adulthood (around 1834-39), is two miles south of Petersburg and about 20 miles northwest of Springfield, IL.

The New Salem State Historic Site is one of the most popular tourist destinations in the state of Illinois.

Samuel French, the play publisher and authors’ representative, has added Abe the Musical to its catalog, before the work even premiered.