“The fine chorus makes a notable contribution to the evening, as do the two pianists in the orchestra, Chris Fenwick and Greg Anthony, who share a delightful specialty number in the first act.”
— New York Times

“Conductor and music director Rob Fisher gives us an authentic taste of that era with his sizable orchestra (including nine violins!) and something completely unheard of in a modern Broadway musical: dueling grand pianos. It’s the kind of opulence only Encores! can provide. Chris Fenwick and Greg Anthony skillfully step into the roles originated by Phil Ohman and Victor Arden, giving us a taste of Gershwin piano times two in the thrilling “Piano Specialty” musical interlude, which Fisher has created based on extensive research into the piano duo and Gershwin.”
— TheaterMania

Lady, Be Good will send you back in time to the Roaring Twenties, when speakeasies and the Charleston were all the rage, and George and Ira Gershwin’s first hit collaboration ushered in the Golden Age of American musical comedy. February 4-8, 2015 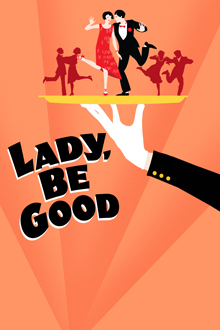