Aint’ We Got Fun! |
Robert Creighton
54 Below 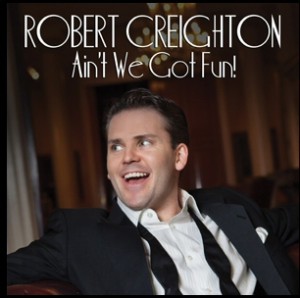 On April 22 young Broadway actor-singer Robert Creighton celebrated his new CD entitled Ain’t We Got Fun at 54 Below with great Broadway musicians: Greg Anthony, music director of Peter and the Starcatcher as his music director/pianist, Steve Count on bass, Eric B. Davis on guitar and uke, Larry Lelli on drums, Ralph Olsen on reeds. Like most of the Broadway performers who appear at 54 Below, the act was autobiographical.

Creighton, who just finished appearing in the Drood revival, had a sold out house of Broadway friends including most of the Drood cast. Creighton bounced on stage clad in a tight suit and grey tie, showing us that he was severely padded in his role of Durdles in that revival. Most of the songs in the act and on the album are from the earliest part of the 20th Century, songs he learned from his music loving parents in Canada. If I had to use one word to describe Creighton as an entertainer, it would be “energy.” You rarely see such animation and unflagging movement in a cabaret act. He worked up a great sweat and at one point mentioned that “if you smelled good, you felt good.” (I think he changed his shirt in the middle of the act)

Creighton is also a composer-lyricist and there were at least three songs from a musical that he has written about his idol, James Cagney. In fact, the first song, “Crazy ‘Bout You” was from that show. He also had spirited patter about his family life, his early years when his parents would wake him up to watch the old black and white musicals on TV, and his stage debut as a child hamming it up in a church show. He also revealed that his wife and he were expecting their second child and sang “Oh You Beautiful Doll” animating holding a baby and its “accidents.” His debut in New York was at New York City Opera in their hit revival of The Merry Widow and then he was cast as a tap dancer in Jackie Mason’s Laughing Room Only and Mason never learned his name, calling him the “Gentile Tap Dancer!” Other Broadway appearances were in The Little Mermaid, Lion King, Chicago and Anything Goes. 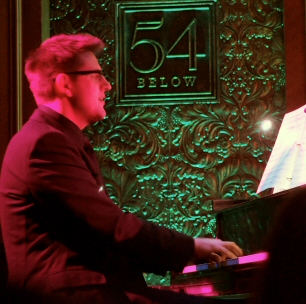 Expressing his admiration for Mel Torme, Creighton did a wild version of Torme’s arrangement of “Lulu’s Back In Town.” Two of his guest stars were from The Little Mermaid: Heidi (Title of Show) Blickenstaff and Tituss Burgess. Blickenstaff, who towers over Creighton, came on stage and sang and danced with him on “You Are My Sunshine.” It was fun watching the odd couple dancing together, sort of like Dustin Hoffman and Vanessa Redgrave in Agatha. She sang a solo torch song entitled “Fortune Is Fickle” that was terrific and slotted for the Ruth Etting character in the Love Me Or Leave Me section of the Cagney musical. Creighton sang his own “Falling In Love” after that.

Burgess jumped up on stage to sing “Accentuate the Positive” and Creighton counter-melodied with him with “Look for the Silver Lining.” It was a terrific partnership.

He saluted Joel Grey, whom he understudied in Anything Goes. When Grey broke his ankle, he gave Creighton many pairs of socks, and Creighton played Moon Mullins for several months with Sutton Foster and then Stephanie J. Bloch. In a pair of Grey’s gifted socks and tap shoes, he sang full versions of George M. Cohan’s “Give My Regards to Broadway” and “Yankee Doodle Dandy,” demonstrating that he had the Cagney footwork down pat.

He talked about working with Chita Rivera and she shouted out from the audience that he had a great ass! On opening night they were chosen as the lovers and she kept encouraging him to go lower on the dip. Then Rivera requested he sing the murderer song when Durdles is chosen as the killer. Creighton complied, singing his confession a cappella!

Creighton’s encore began with the orchestra playing the melody to the beginning of “Night and Day” but when he started singing, he was singing “Johnny One Note” with all the great high notes and instrumental imitations, including kazoo playing and duels with his musicians! It was a terrific finish showing off all his amazing talents and energy!