The sun eventually smiles, and the mustachioed bad guy gets his comeuppance in “Brundibar,” the opera for children that opened last night at the New Victory Theater. But the story behind this little musical charmer does not include many happy endings.

Just before its premiere in 1942 at the Jewish boys’ orphanage in Prague, its composer, Hans Krasa, was arrested and sent to Theresienstadt, or Terezin, the concentration camp disguised as a “model ghetto” that was essentially a hub for transports to the Nazi death camps. Rudolph Freudenfeld, the conductor of the premiere performances, took the score with him when he and the boys from the orphanage were also sent to Theresienstadt. 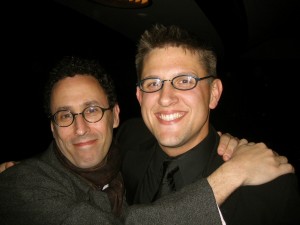 It was performed at the camp 55 times, providing distraction and perhaps a small respite from the misery. But it was also exploited by the Nazis for propaganda purposes in their attempts to present Theresienstadt as a comfortable environment. Ultimately, Krasa, most of his collaborators on the project and nearly all of the children who performed in it were killed at Auschwitz.

This sad, freighted history is a large burden for a little opera to bear, but it does not cast too long a shadow at the New Victory. Tony Kushner, who has provided a new English libretto for this production (the original is by Adolf Hoffmeister), describes the opera’s provenance in the program. He has also written a small play, “But the Giraffe,” that is performed before “Brundibar” and gently colors in the historical context. This production certainly can be used as a soft point of entry for children old enough to begin grappling with the history of the Holocaust.

But parents worried that younger children will be upset or confused have no reason to fear. Mr. Kushner and his collaborators, the celebrated children’s book author Maurice Sendak and Kris Stone, who designed the production, and the director, Tony Taccone, allow this essentially frolicsome opera to sing for itself. And Mr. Kushner’s curtain raiser has been written with a fine sensitivity to its appropriateness for children of almost any age. (The show is recommended for those 8 and older.)

“But the Giraffe” tells a fictionalized version of the story behind the smuggling of the score of “Brundibar” into Theresienstadt. A young girl from a middle-class family, played by Danielle Freid, is determined to bring her beloved stuffed giraffe with her when the family moves to new quarters. But her mother insists there isn’t room in the suitcases for the toy, Uncle All-Neck.

He might just fit, but the little girl’s uncle, Rudy (William Youmans), would really prefer that she make room in the suitcase for the thick pile of papers he’s so attached to: the score of a certain opera, which might bring joy not to just one little girl, as Uncle All-Neck does, but to lots of little boys and girls.

Mr. Kushner uses the family’s bustling preparations to make allegorical points about the Jewish people: they are both “remarkable” and “ordinary,” like giraffes’ long necks.

“Giraffes constitute a tribe unique in all the world,” says the little girl’s grandmother. “But giraffe necks still have only seven vertebrae — neck bones. And all animals on earth, including you, me and grandpa, we are animals, all animal necks have seven vertebrae.”

The play ends on a somber note that underscores the pain of loss. But for children not old enough to grasp its larger resonance, “But the Giraffe” is essentially an amiable little comedy that extols the virtue of selflessness and sharing.

“Brundibar,” which follows after an intermission, likewise blends a few somber notes into its score and its story line. Pepicek (Aaron Simon Gross) and Aninku (Devynn Pedell) are a brother and sister whose ailing mother desperately needs milk. But the village milkman won’t give it away.

“There’s no milk if there’s no penny,” he sings. “Even kittens can’t have any.”

Pepicek and Aninku hit upon the idea of singing for those pennies, but the town’s greedy organ grinder, Brundibar (“bumblebee” in Czech), drowns out their song. When a trio of helpful animals helps rally the town’s children to create a booming chorus, the nasty Brundibar is vanquished.

Krasa’s jaunty, melodic score is rhythmically varied and full of bright coloring. Its climactic number is a happy march that sends the bad guy packing, stripped of his cartoonish military attire and looking properly silly in his red underwear. But the penultimate song is a softly undulant lullaby, for which Mr. Kushner has provided mildly melancholy lyrics that tell of the fears that come “when night is gathering nigh.”

The production is handsome without being flashy. The evocative sets by Ms. Stone draw on the muted colorings and signature lines of Mr. Sendak’s work. Robin I. Shane’s costumes brighten the stage, and the bodysuits for the cat, dog and an airborne sparrow will particularly please children.

Euan Morton, of “Taboo” fame, tears into the tasty role of Brundibar with infectious relish, capering across the stage in his cartoonish costume like a giant toy battery-powered by malice.

Mr. Kushner and Mr. Sendak, who previously collaborated on a children’s book inspired by the opera, interrupt the exultant last chorus to allow the lovably hateful villain a final threat. “Nothing ever works out neatly,” he says. “Bullies don’t give up completely. One departs, the next appears, and we shall meet again my dears!”

Too true. The noxious voices of bullies — and worse — ring out through history. But as the unlikely survival of this opera suggests, the joy and beauty that music and art express can outlast evil even when they cannot defeat it.

Brundibar
But the Giraffe